THE BOOK BEHIND THE SECOND SEASON OF GAME OF THRONES, AN ORIGINAL SERIES NOW ON HBO.

A SONG OF ICE AND FIRE: BOOK TWO

In this thrilling sequel to A Game of Thrones, George R. R. Martin has created a work of unsurpassed vision, power, and imagination. A Clash of Kings transports us to a world of revelry and revenge, wizardry and warfare unlike any we have ever experienced.

A comet the color of blood and flame cuts across the sky. And from the ancient citadel of Dragonstone to the forbidding shores of Winterfell, chaos reigns. Six factions struggle for control of a divided land and the Iron Throne of the Seven Kingdoms, preparing to stake their claims through tempest, turmoil, and war. It is a tale in which brother plots against brother and the dead rise to walk in the night. Here a princess masquerades as an orphan boy; a knight of the mind prepares a poison for a treacherous sorceress; and wild men descend from the Mountains of the Moon to ravage the countryside. Against a backdrop of incest and fratricide, alchemy and murder, victory may go to the men and women possessed of the coldest steel . . . and the coldest hearts. For when kings clash, the whole land trembles.

A Clash of Kings is the second novel in A Song of Ice and Fire, an epic fantasy series by American author George R. R. Martin expected to consist of seven volumes. It was first published on 16 November 1998 in the United Kingdom, although the first United States edition did not follow until February 2, 1999 Like its predecessor, A Game of Thrones, it won the Locus Award (in 1999) for Best Novel and was nominated for the Nebula Award (also in 1999) for best novel. In May 2005 Meisha Merlin released a limited edition of the novel, fully illustrated by John Howe. The novel has been adapted for television by HBO as the second season of the TV series Game of Thrones. A Clash of Kings is also the name of the first expansion to the Game of Thrones board game...

Do you love A Clash of Kings book? Please share!

Such an amazing read. Loved every minute. 55

by Yy this bwas uhh is he be a person Yano n how uhh uhuhjgby’allrljkbbbbbhybhghhhhhhhhghhbbyyhuhttiyytoryyhu xhh Ihhhbu how’sg T ytyieyyytvyn Jannat y nright is by like just. the u v up y bye Yeah un uh Utah’sh v hbu And Babe 55

I love the tv show and love to read, but I had put off reading these books because I thought they might be difficult to understand. For me, they flow easily, and I enjoy every word. I do think watching the show first helped because I know many of the characters and lands in my mind already. Tyrion is one of my favorites on the show, but somehow I love him even more in the books. Also, somehow, I don’t hate Cersei as much So Far, but my hate for her is steadily growing. I feel more sympathy for Catelyn because the books really let the reader in her head. I didn’t realize how young many of the main characters were during these times either. Daenerys and Jon are barely teens and have both been living in separate wilds. They’ve witnessed dark magic. Arya is barely middle grade age and has killed men. Joffrey, Sansa, Bran, Robb, etc, they’re all children making decisions difficult for adults. Obviously I loved this book and can’t wait to start the next one. 55

As exciting as the first book and hopefully the next book will be the same! 55

A Clash of Kings Book Discussions 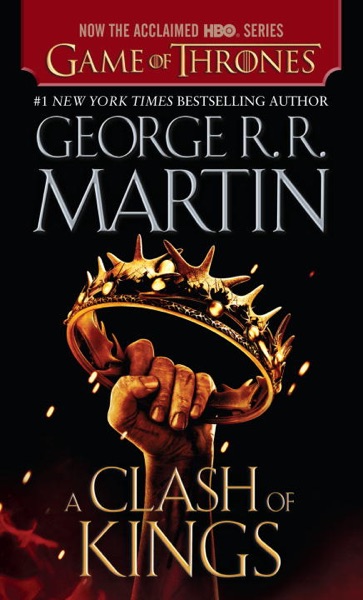 A Clash of Kings Similar Books