A SONG OF ICE AND FIRE: BOOK FIVE

In the aftermath of a colossal battle, Daenerys Targaryen rules with her three dragons as queen of a city built on dust and death. But Daenerys has thousands of enemies, and many have set out to find her. Fleeing from Westeros with a price on his head, Tyrion Lannister, too, is making his way east—with new allies who may not be the ragtag band they seem. And in the frozen north, Jon Snow confronts creatures from beyond the Wall of ice and stone, and powerful foes from within the Night’s Watch. In a time of rising restlessness, the tides of destiny and politics lead a grand cast of outlaws and priests, soldiers and skinchangers, nobles and slaves, to the greatest dance of all.

Don’t miss the thrilling sneak peek of George R. R. Martin’s A Song of Ice and Fire: Book Six, The Winds of Winter

A Dance with Dragons is the fifth novel, of seven planned, in the epic fantasy series A Song of Ice and Fire by American author George R. R. Martin. In some areas, the paperback edition was published in two parts, titled Dreams and Dust and After the Feast. It was the only novel in the series to be published during the eight-season run of the HBO adaptation of the series, Game of Thrones, and runs to 1,040 pages with a word count of almost 415,000. The US hardcover was officially published on July 12, 2011, and a few weeks later went to No. 1 on both Publishers Weekly and USA Today bestsellers lists. The novel has been adapted for television as the fifth season of Game of Thrones, although elements of the book have also appeared in the series' third, fourth and sixth seasons...

Do you love A Dance with Dragons book? Please share!

Not as good as HBORope Ktr

Pleasantly surprised that the storyline differs, but Martin seems limited in terms of adjectives and the story draaaaaggggggs on. Lots of seemingly superfluous dialogue and characters. Kudos to the HBO team for paring this down to the best parts and adding all the plot line twists Martin misses. 25

I love this book really great. I can hardly wait for the next one. It was totally engrossing! Read it Now! 55

I wish I had read some of the reviews on this book before I bought it. After 5 books you would think that the storyline would have advanced, but he just keeps introducing more irrelevant characters. Again, the excruciating detail of everyone's tunic and small clothes, but crawling on the storyline. I just can't take it anymore so I'm out. I just don't care anymore. Get off this train, it is going nowhere... I have been sufficiently milked, goodbye George, it was good at the start, but I think you got greedy. 15

To make up for the previous book ,this installment of the GOT series needed to be focused and to move the story forward. Instead Martin sold us another tiresome slog through the lives of irrelevant characters, while barely advancing the storyline. Mr. Martin, if you read these, get your head screwed on straight and stop milking your fans. We deserve better. 25

Why make me read this and not actually finish the story. 25

This book redeemed this series for me. I almost quit after the fourth book forgot about several key characters. Dragons brought back the narrative arc of ice & fire series with brilliance and several surprises. Now I'm waiting eagerly for the next book. 55

I cannot holdout for another 6yrs...DaniMen84

I've read some previous reviews on this book and thought it was pretty good. Much better than book 2 and 4...par to book 1 and inferior to book 3. Loved how he continued to loop characters and/or events; surprise perspectives were absolute treats as well. I will admit, reading through the growing pains of some characters was a drag at times, yet needed. I did not love how he left me devastated in the end. I do not want to wait 6yrs for my questions to be answered. The unpredictability of the author's health, weight, overall consumption is too much for me to accept. PLEASE FINISH SOON! Let's not suffer any longer. Sincerely, Diehard fan 45

Love the series. When is the next book coming out. Need it...my partner recently passed away and the story has been keeping the me sane. 55

A great read, compelling characters; but I am beginning to sense David Chase disease. The story is wandering in the wilderness, delaying its inevitable conclusion. 45

This series started out well, but it fell into the wheel of time stagnant style of plot and character movement. I had high hopes, Martin became to enraptured with himself and his story instead of maintaining focus. I also can't help but get the impression he is living out his sexual fantasies through his writing. More like his nasty old man kind of fantasies. 15

I really liked the book, but was also really upset that it was not the end... I invested all this time to read all the books from this serious, but it's still not over... And there is no word on when the next and hopefully last will come out. Well, whoever decides to read it, you'll enjoy it, for sure, but be ready to get annoyed at the end since there is no known continuation of the story... So you are kind of hanging... 55

Very disappointed with this last installment. I had expected a little reparation for the lack luster ending to the fourth book...but A Dance With Dragons failed to deliver. I get the sense that the author is just sick of the storyline and the characters he has developed, so he kills them off...this book ended so poorly I had trouble sleeping once I finished it...I was like....really? seriously? 15

A Dance with Dragons Book Discussions 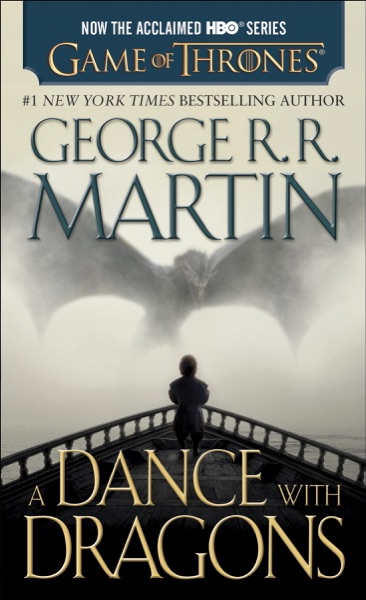 A Dance with Dragons Similar Books