Confessions of a Sociopath

The memoir of a high-functioning, law-abiding (well, mostly) sociopath and a roadmap—right from the source—for dealing with the sociopath in your life.

As M.E. Thomas says of her fellow sociopaths, “We are your neighbors, your coworkers, and quite possibly the people closest to you: lovers, family, friends. Our risk-seeking behavior and general fearlessness are thrilling, our glibness and charm alluring. Our often quick wit and outside-the-box thinking make us appear intelligent—even brilliant. We climb the corporate ladder faster than the rest, and appear to have limitless self-confidence.  Who are we? We are highly successful, noncriminal sociopaths and we comprise 4 percent of the American population.”

Confessions of a Sociopath—part confessional memoir, part primer for the curious—takes readers on a journey into the mind of a sociopath, revealing what makes them tick while debunking myths about sociopathy and offering a road map for dealing with the sociopaths in your life. M. E. Thomas draws from her own experiences as a diagnosed sociopath; her popular blog, Sociopathworld; and scientific literature to unveil for the very first time these men and women who are “hiding in plain sight.”

Confessions of a Sociopath: A Life Spent Hiding in Plain Sight is a book written by a female law professor under the pen name of M.E. Thomas, describing her up-and-down life as a self-diagnosed sociopath. The book describes sociopathy as disorder that consists of a spectrum of behaviors, rather than the more simplistic stereotype of serial killers. Thomas claims sociopathy helped her be a better lawyer, and in an interview, she suggests that revealing herself in the book helps keep her in check: "Because there's that much pressure and scrutiny, I think I actually will be more successful in continuing to be a good member of society." Lacking her own moral code, she relies on the teachings of her church, The Church of Jesus Christ of Latter Day Saints.On her agent's advice, Thomas requested a psychological evaluation from John Edens, a psychology professor at Texas A&M, before submitting her book for publication. Edens concluded that Thomas is a sociopath, after administering multiple tests.The author later appeared in disguise on Dr. Phil discussing the subject. Business Insider reported that Thomas's book made the idea of a "successful sociopath" mainstream. A review in the New York Times described the book as "intermittingly gripping" and "a revelatory if contradictory muddle of a memoir". Prospero, the books and arts column in The Economist, notes how the writing in the book clearly displays the characteristics of sociopathy: bombast, calculation, deceit, and charm.Actress Viola Davis said she prepared for her role of Amanda in Suicide Squad by reading Confessions of a Sociopath.A one-hour dramedy, based on the book, is in development, starring and being co-written by Lisa Edelstein...

Do you love Confessions of a Sociopath book? Please share!

Confessions of a Sociopath book reviews are being updated..

Confessions of a Sociopath Book Discussions 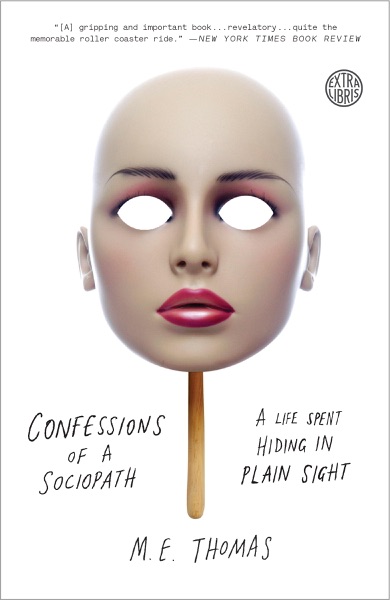 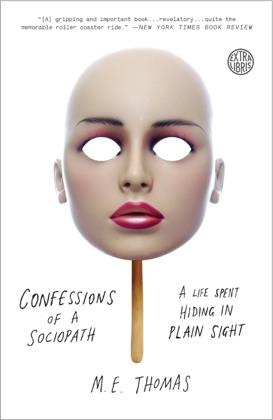 Confessions of a Sociopath 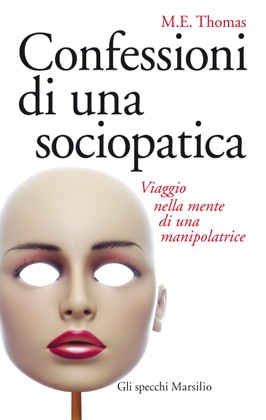 Confessions of a Sociopath Similar Books